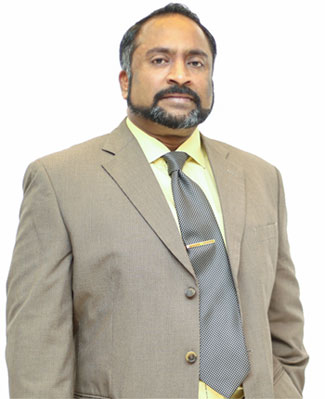 Mr. Ashok has completed his graduation in Mechanical Engineering & MBA from Madras University. To further hone his managerial skills he pursued an Executive Management Program at Michigan University, USA. He is inducted as the Fellow of the Institution of Engineers (India). He is a member of Professional organisations namely MMA, IE, IEEE, SAE, ACM, American Institute of Aeronautics- (AIAA) to name a few. He is an outstanding leader and educationist who steers the HGI with a foresight to propel the institution to achieve global recognition. He has been instrumental in promoting HITS to enter into the fray of world rankings and through his guidance HITS has achieved QS BRICS 301-350, QS India Regional Rankings 81-85, QS Asia 2020 overall 501-550.

He has earned many accolades to his credit and was awarded the Educational Entrepreneur of the Year by Shri Pranab Mukherjee, Hon'bl Former President of India during the ASSOCHAM National Education Summit 2019. He is also a recipient of IEEE award for his contribution to Engineering.

He has conducted several National and International Conferences, Seminars, and other reputed events. He was also invited as an eminent speaker in e-lets World Education Summit, 2019 at Delhi and awarded Best Speaker. He has many patents and has numerous publications to his credit. He is one of the pioneer in accomplishing Work Place Management System in Higher Educational Institution and published a paper titled "5S implementation in workplace - A conducive environment enhancing motivation in educational institution" in Scopus indexed Proceedings of the International Conference on Industrial Engineering and Operations Management.

Patent was granted by the Govt. of India for an invention titled. "A method and a prior warning mixed mode communication systems for the natural calamities".

He has been instrumental in encouraging students to involve in projects and accomplish fame in the international arena few of the acclaimed projects are:

He exhibits keen interest in Sports and is the President of Hindustan Sports Foundation that encourages sporting talent in the Country. He owns a professional Football Club in Chennai - Hindustan Eagles Football Club. He established Ayrton Senna Motor Sport Hub at Hindustan University. He is also instrumental in introducing Motor Sports engineering programmefor the first time in an Indian University.

He is a philanthropist and contributes to the welfare of the society by providing free education to the underprivileged and also provides scholarships for the meritorious students and those who excel in sports. He held the post as President of the Rotary Club of Chennai Capital and also past Chairman of Madras Coastal Round Table. His initiatives in promoting green campus has resulted in achieving the Good Green Governance Award six consecutive times for Hindustan University.