The students of final year MBA Hotel & Tourism Management and the UG - BBA Tourism &Travel Management and Aviationhosted the Madras Week – Namma Madrasapattinam 2021 as a part of club activity. The main objective of celebrating the Madras week was to share the glorious history and vibrant past of our city that came into existence on August 22nd 1639. What began as a half day celebration 13 years ago has now become a week-long event from August 22 – 28 every year as Madras week. Madras week commemorates the beginning and expansion of Chennai, making it possible for the present generation to look back and see how it all begun. Hence, the Pranaam – Hindustan Hospitality Club decided to celebrate the 382nd Madras week celebration with the entire campus of Hindustan Institute of Science and Technology from 18 to 20 August 2021.

The inauguration witnessed around 200 spectators through 2 google meet links including faculties and students of MBA, BBA, Engineering, Fashion Designing, Arts and others. The MC was done by the MBA final year students Mr. Andrew Benjamin and Ms. Muskan Dubey. With the tradition, the celebration begun with the Tamilthai Valthu followed by the Welcome address by the Head of Department, M.K. Badrinarayanan.Dr. Pon Ramalingam, Registrar, HITS congratulated and appreciated the initiative taken by the club. He also encouraged all the clubs to bring up more activities and events.

The first Talk Show of the day was by Ms. Thirupurasundari Sevvel on “Singara Chennai”. Ms. Thirupurasundari is a renowned Architect as well as an Urban Planner trained in UK and France. Apart from that she is also the initiator of “Nam Veedu Nam Oor Nam Kadhai” an initiativethat stems from her passion for storytelling, heritage, history and education. She gave aninsightful talk on the History and Ancient Infrastructure of Anna Nagar, Aminjikarai & Shenoy Nagar.

The second Talk Show was by our Alumnus Mr. Suraj Singh on “Tamil Thiraipadam”. He is an Asst. Manager at Zee Entertainment Enterprises Ltd. He had pursued his MBA in Media and Entertainment from Hindustan Institute of Technology and Science where he has also been the Cultural Secretary. He also shared us his experience in the media industry in which he was a part of past 5 years. He explained how Cinema emerged in Madras through his presentation and videos.

The first competition on 18 August was the Debate judged by Dr. M Rajeswari and Dr. Loganatha Prasanna. We had around 6 teams competing with each other on the topic “Madras v/s Chennai”. The 1-hour long event came to an end with a note by saying - past or present our city has always been the best.

The second competition was Photography with the theme “Vintage Madras”. The participants had the choice of submitting multiple photos and were declared winners through likes and relativity to the theme. All the photos were posted in the Travelogs Instagram page. The club members had a hard time selecting the winners as every photo had 200+ likes and were the best shots of Chennai.

The third competition was the “Connection”judged by Mr. Saravana Kumar. We had a total of 8 teams with 2 participants each. The competition had 4 rounds of connections and ended with a tie breaker round.

The last competition was “Just a Minute”judged by Ms. Catherene and Dr. Madhumitha. The event had around 5 participants given a place 2 minutes prior the competition to prepare and 1 minute to speak about the given destination.

The valedictory ceremony gathered over 120 spectators using 2 google meet links. Pro Vice Chancellor, Dr. Alexander Jesudasan begun the valedictory address with the slogan of Namma Madrasapattinam 2021 – “Chennai is a Word, Madras is an Emotion.” He shared his experience being in Chennai and also the emotional connect with city. He appreciated the entire team and the School of Management for bringing up the initiative and also including the entire campus for the event.

The first “Talk Show”for the valedictory was by Chef Saravanan on “Parampariya Samayal”. He heads the Culinary Operation of Marigold Hotels by Green Park Hyderabad. Chef Saravanan is a person of varied experience gleaned from years spent at tenures ranging from luxury cruise liners to years spent in USA promoting Indian cuisine. He shared his experience and knowledgeable perception of the cuisine in Chennai. He started a mouthwatering session beginning with the non veg stalls in marina beach in the evening, sundal for couples and idli shops for bachelors.

The last “Talk Show”for the day was by our Alumnus Mr. Rj Riyas on “Vazhviyal and Kalacharam”. Rj Riyas was the recipient of the University Rank Holder Award for the year 2015. Other than being a radio jokey with radio mirchi, he has also hosted several stage shows for various occasions, participated in Vijay TVs shows, is a spokesperson for rotary club madras and was recently awarded with the Public Image Award for being active during this pandemic situation.We experienced a fulltime entertainment live radio session from our alumni making it interesting with music videos and memes.

The surprise bytes of all professors made the entire viewers emotional. The technical team has put a wonderful work by asking the heads and the professors to express their views on Chennai is a Word, Madras is an Emotion. It was a 4-minute-long video covering most of the departments of HITS. The video was compiled and edited by Mr. Lalith Kumar,Mr. Andrews P.and Mr. Ajay Benny of MBA Media.The valedictory session came to an end with the instrumental performance of Ms. Auro Pradeepa of BBA and a classical performance by Ms. Varshini of MBA. 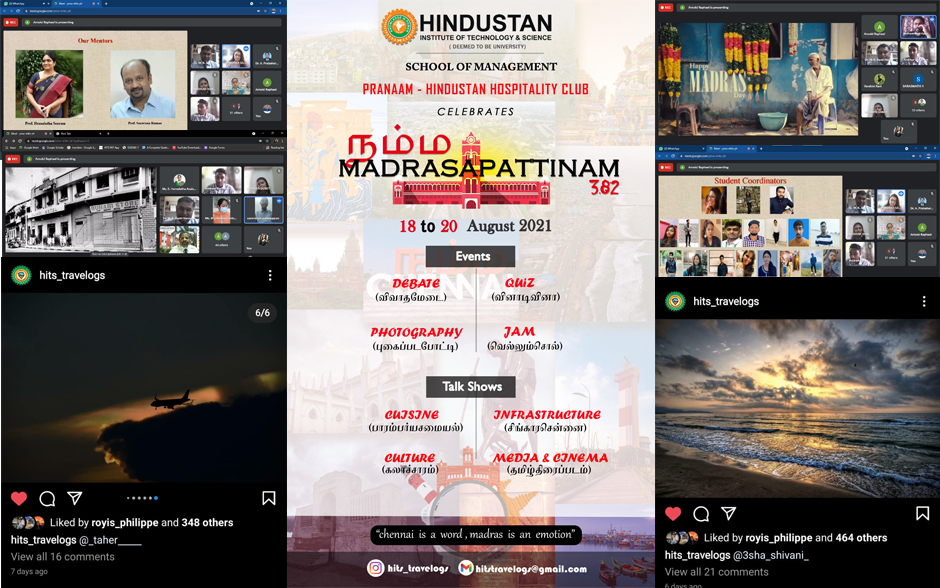