LABYRINTH is a series of events, initiated by the house of Athena, Literary Club of the Department of Languages which commenced on 22 Jan. 2021 and lasted till 27 Jan. 2021. All the events shared the same theme, but had different propositions of implementation. Segmented into four events: Lawyered Up, Hoist, Story Time, and Seafarers; Labyrinth challenged the participants on not only oratory skills, but in various other aspects such as formal conversation, analytical skills, presentation and improvization. Labyrinth was a platform for extended communication between students, which was intended to narrow the gap that was created in the new era of online education. The event was coordinated byDr. Sonu Joseph, Assistant Professor, Department of Languages, and Mr. Avinash Mallick, 2nd year, B.Tech. CSE; and convened by Dr. AkkaraSherine, Head, Languages & Rankings. Over 50 students across all years, majority from the first years, participated in Labyrinth.

The ceremony began with Ms. Varsha. S. Nair giving an introduction on Athena – The Literary Club and Labyrinth, followed by an invocation song 'On My Knees’ sung by her. Dr. AkkaraSherinedelivered the welcome address; andDr. Sonu Joseph introduced the Chief Guest, Dr. AnindyaSyam Chowdhury, Associate Professor, Department of English, Assam University. Dr. Syam Chowdhury, appreciated the efforts taken by the Department of Languages to put forth an event which was not only fun but also give students an exposure to challenging events which build language proficiency, improve communication skills, and enhance quick thinking. The event concluded with the vote of thanks by Mr. Avinash Mallick.

LAWYERED UP -“You can't leave it to speculation”

An event where students will be randomly chosen and given a case assigning roles, evidence and witness testimonies, letting the Defense and Prosecution battle it out. Whoever can sell a more convincing story is declared to have won the case, and hence the game! The participants put their thinking caps on and threw arguments in a short span of time which tested their quick thinking, communication, and language proficiency. Dr. M.K. Badrinarayanan, Head, School of Management presided the event as Judge and appreciated all the participants for their logical and reasoning ability. Ms. Varsha Nair, 1st BA English, the host of the event opined, “I loved hosting the event. Not only was it super fun, it was also super competitive. Watching the battles between the participants was incredibly entertaining”.

HOIST -“Battle it Out”

The ideology behind Hoist is analysis, specifically looking at both the sides of any conversation, where the contestant is faced with a challenge where they have to think and present with one side that they personally agree with, and another they do not, as it enables people to understand and respect the opinion of other people and their different views on every topic.Mr. P. Richard Jagadeesan, Assistant Professor, Dept. of Languages judged the event and applauded the interest of the students. In Mr. Avinash Mallick, 2nd year, B.Tech. CSE comments, “The technical imbalances, the timing mismatches and so on were carefully taken care of, so the event's only problem would be, to decide who was the best participant. It was marvelous and exciting to see the talent pool that participated, grow and compete stronger, wiser and better than ever.”

Story Time was an event to make the participants implement their creativity at its best, allowing them to choose from an array of topics. The competition was not a test of adaptability, but rather, emotion, and how best can it be put to words. The topics were carefully chosen to ensure that the participants get to listen to various versions and strong opinions of creative notions of contestants on very relatable themes of the contemporary world. Dr. M.S. Priyadarshini, Associate Professor, Psychology adjudged the event and was impressed with participants’ pro-active enthusiasm.Mr. Dhairya Mehta, 1st year, Visual Communication and the host remarked, “Being part of this event, I have also learned a lot from the talent witnessed and could apply myself to be better than ever.”

If you find yourself in the middle of an ocean, and you realize you're sinking, what would you do? You'll have to fight, to survive, to escape the merciless clutches of the saline beauty. Each fictional character on a sinking ship wins safety if they could convince the Captain to give them the one life jacket left on the ship!This event was designed to help the students learn how to deal with critical situations, marketing skills, communication skills with presence of mind. As the participants are given a fictional character, they will need an understanding of their own character and that of their competitors to prove that they are a better choice. Mr. Avinash Mallick, the Caption of the ship was indeed a hard nut to crack withcross interrogations that were nerve-racking and critical. He was appreciated for his persistence efforts by all. On judging Sea Farers, Ms. Clarisse Rouabah, Assistant Professor, French, Dept. of Languages expressed her views on developing the non-verbal communication skills of the participants and appreciated their scintillating wit while defending the characters given to them. The host, Ms. Stuti Goyal, 1st year, B.Tech. Aerospace Engineering commented, “It was really fun, although at times I was glad, I wasn't one of the participants. We all enjoyed it a lot, because it's funny when it’s not happening to us”.

Post event, the Judges appreciated the students for the wonderful showcase of their talents and gave their views along with a few tips and tricks to the participants on how to analyze any situation better. They also gave a little insight into how the participants can iron out their minute cricks, which shall eventually bring them to near perfection. The Judges claimed that the participants were all impressive and the event was successful to accomplish what it sought out to do.

Mr. Abhinav Rajesh, 1st year, B.Sc. Food Technology who won three on four events of Labyrinth observed, “When I came into this competition, I never expected that I would win even one, but was surprised on that regard. It gave me confidence and I am not going to deny, I did feel really good winning; but the major satisfaction came from the fun of just taking part. It was a blast!” 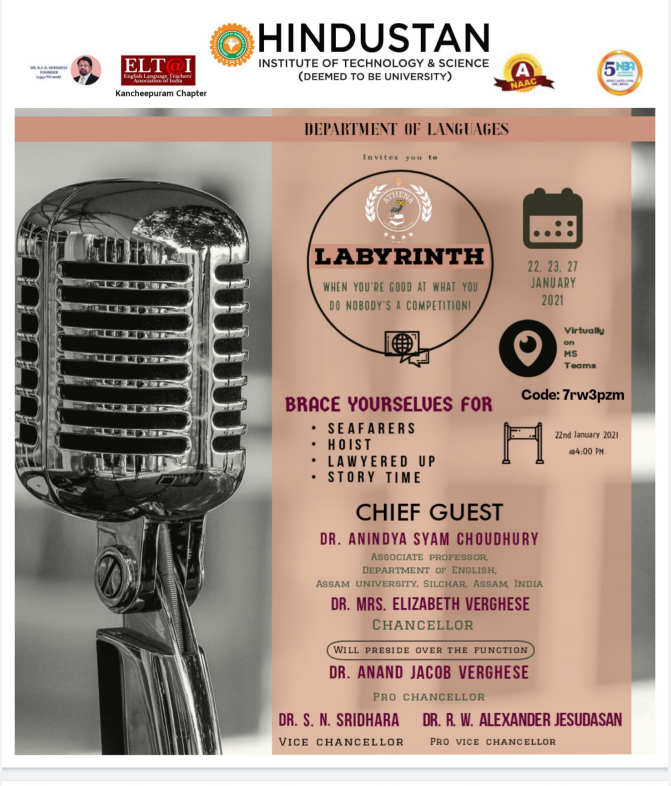 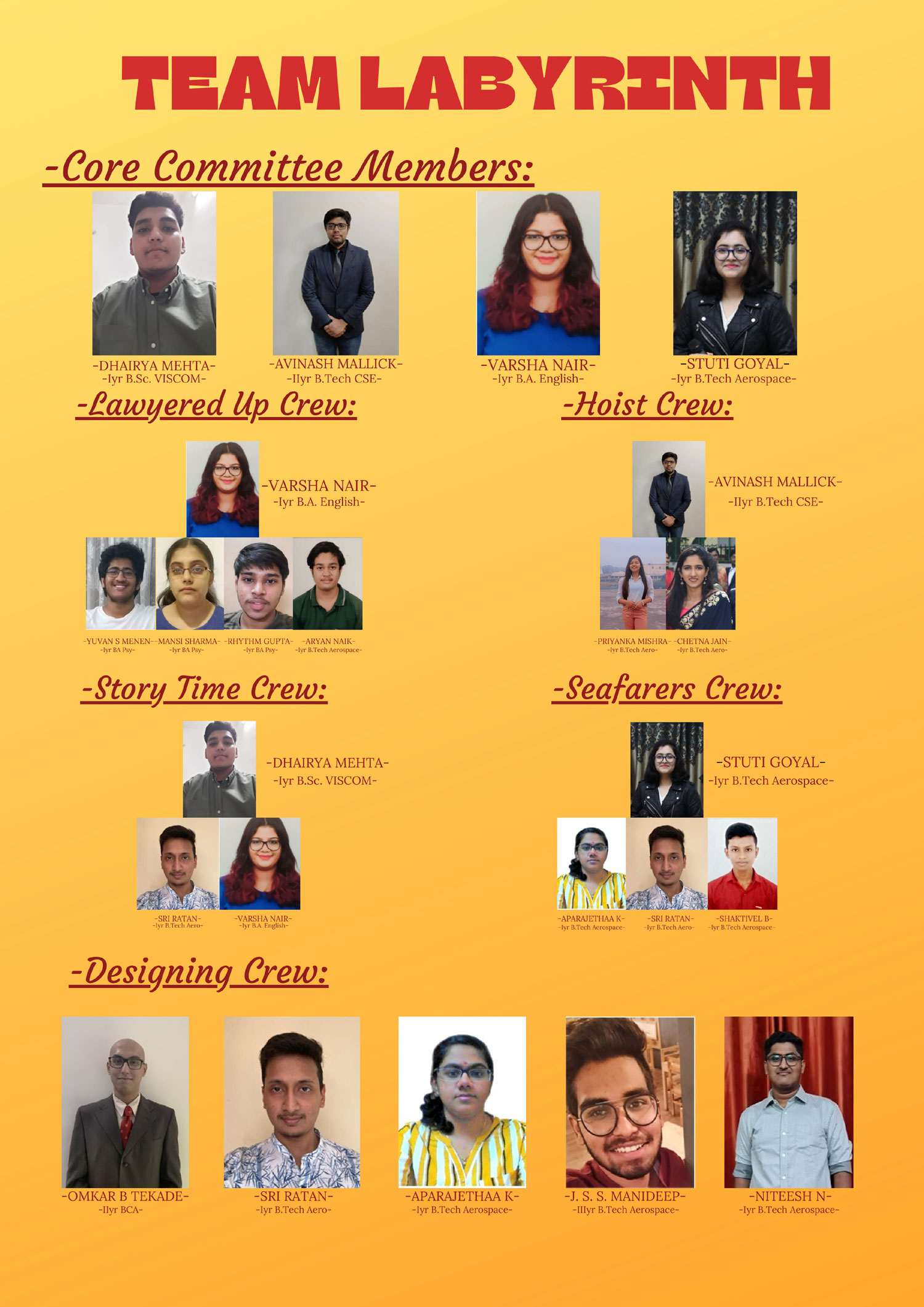