Dr. Ilavazhagan, Director, International Affairs, addressed the students and informed that it is essential to learn the foreign languages and merge the boundaries understanding the foreign languages and culture. Also, learning a foreign language gives ample opportunities to go for higher education and also there is better scope for employability. Dr. David Easow, Head School of Liberal Arts and Applied Sciences, invigorated the students and made them stand and wish Happy Teachers Day in French. He later stressed on the importance of learning a foreign language and its benefits. Ms. Clarisse, Assistant Professor, French gave a talk on the students’ experiences learning French and also highlighted the activities of the French Cafe Club at HITS. She motivated the students to join the club and know more about the language, traditions, food and culture of France.

Ms. Rhea Chery Shivan delivered a talk on the “Importance of Learning French and Higher Study Opportunities in France”. She gave a brief about Insitut Francais in India and the South Indian Team and highlighted the benefits of learning French and also the benefits as student in France. She informed that for students who plan to go to France and pursue higher education, there is heavily subsidised tuition fees, no discrimination between French and foreign students, Govt reimburse up to 30% of rent, school housing support (CROUS), work part time up to 19.5 hours while studying and subsidies on public transport, libraries and cafeterias, museum etc.

Ms. Rhea also emphasised that there are several job opportunities in India for the students. France is the world’s 7th largest economy and India has over 1000 French companies employing over 300,000 skilled workers few of the companies are Dassault, Renault, Total, Capgemini, L’oreal, Decathlon, Michelin, La French Tech and many more. She further explained about the scholarships in France and reiterated that French government offers scholarships worth over 1 million euros or 10 crores rupees to Indian students and more than 500 scholarships awarded each year. Scholarships are offered for all fields and subjects at Bachelors, Masters and Ph.D. Levels, and on the basis of academic excellence and the age limit is 30 years. More than 500 scholarships are awarded each year.

Ms. Rhea recounted the Franco India collaborations and the mutual agreement between India and France on Academic Qualifications signed by President Emmanuel Macron during his visit to India in 2018. As per the signed agreement, France and India will recognise degrees of both countries. Ms. Rhea concluded her presentation requesting students to go ahead with question-and-answer session. It was an enlightening session and it concluded with a vote of thanks proposed by Dr. Marie Evangeline, Assistant Professor, Dept of Languages. More than 250 students from Liberal Arts and Engineering participated in the event. 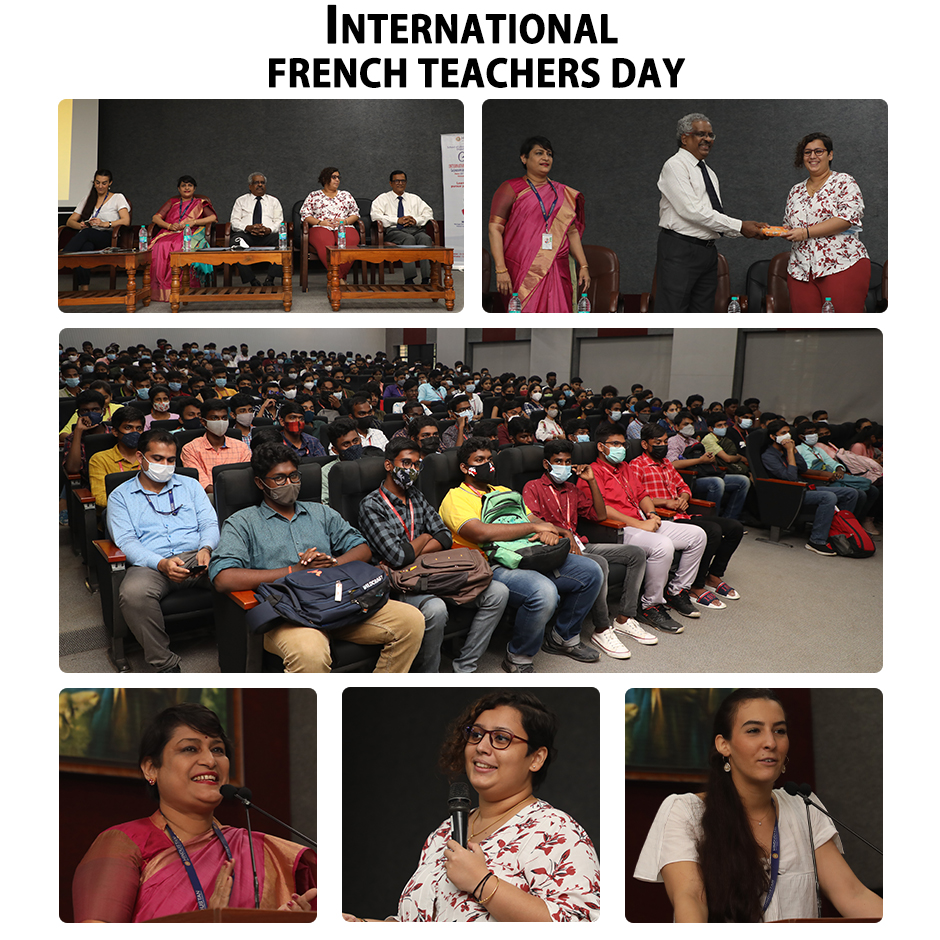