The Department of Languages and the Athena Literary Club conducted a musical event, AZURE, which refers to the bright blue colour, and the colour of music. The Valedictory Programme for the same was held on the 27 May2021 at 3:30 p.m. via MS Teams. Students from various departments and across all the years turned in to participate; and submitted their 3-5minute renderings in the given registration link. Mr. Sugandh Shekar, Playback Singer and Alumnus of judged the event and presided as the Chief Guest for the valedictory.Dr. Sonu Joseph, Assistant Professor, Department of Languages convened the event. Omkar B. Tekade, II Year, BCA and Jane Carolyn, III Year, IT Cybersecurity, hosted Azure.

Dr. AkkaraSherine, Head, Department of Languages and Rankingsin her welcome address emphasized on the importance of music education and enhancing fine motor skills. “It gives super working memory and creates better-thinking skills", Dr.Sherineadded. Avinash Mallick, II Year, CSE and the President, Athena Literary Club, introduced the Chief Guest, Mr. Sugandh Shekar. He mastered the art of Hindustani classical music vocals under the guidance of Mr. Humble Shine, and in Sufi music under UstadHidaayat Khan Sahib at KM Music Conservatory. Some of his significant accomplishments include a playback debut for Telugu no. in the film, Oka ChinnaViramam. He also has played back alongside renowned directors like A. R. Rahman. He is also a part of A.R. Rahman’s super eight Sufi ensembles and Sunshine Orchestra. He has performed at the Indian Premier League 2017, Hyderabad and India’s Got Talent 2018. In his keynote address, he said that the university was the place where he first participated and faced an audience. He also asked the students to take advantage of such platforms so as to chisel and hone their skills.

Mr. C.Nagaraju, Assistant Professor, Department of Languages, announced the winners. The winning performances of two participants were then played to entertain the audience. Firstly, Neeraj Potdar’s, IYear, Aerospace Engineering; who soulfully sang a classical Hindustani Bollywood song, while playing the guitar; and secondly, Stuti Goyal’s, I Year, Aerospace Engineering; a classic Western solo piece; enthralling the crowd with her lovely voice and high falsettos; playing the keyboard alongside. The Chief Guest then reviewed a few performances, stressing four key factors; essential for any musical performance- pitch, aesthetics, pronunciation and rhythm. The event concluded with a musical feast, by the Chief Guest himself and the Vote of Thanks by Sarah Sam Mathew, I Year, B.Sc. Food Technology and a coordinator of the Athena Literary Club. 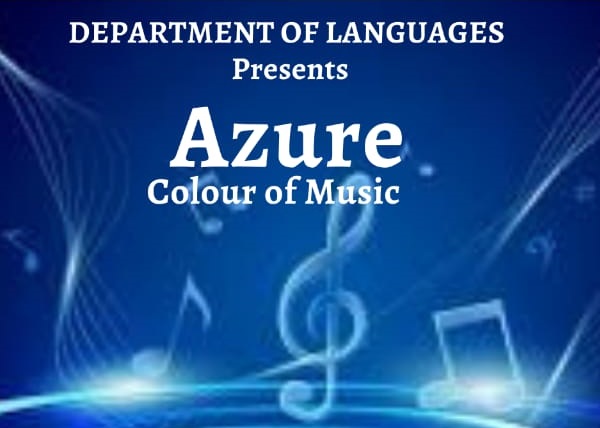