Hindustan University held its 8th Convocation ceremony at the University premises on 7 October 2017.This auspicious event commenced with the invocation, by singing Thamizh Thai Vazhthuand proceeded by the convocation being declared open by the Chancellor, Dr. Mrs. Elizabeth Verghese. The welcome address and report was presented by the Vice Chancellor, Dr. S. Ramachandran.

Through the convocation report, Dr. S. Ramachandran proudly exclaimed, “there has been a marked improvement and significant increase in all the domains of academics which was possible because of the commitment of our faculty, staff and students alike and able guidance and encouragement by the management.”Dr.Ramachandran further articulated his gratitude and happiness on obtaining a CGPA of 3.3 on 4 by the NAAC peer team. In terms of world recognition the Vice Chancellor proudly informed that HITS has been rated 3 Stars by the world renownedinternational rankings organization Quacquarelli Symonds QS, HITS scored 5 stars in Teaching, Employability,Facilities, Innovation and Inclusiveness and an overall rating of 3 STARS Ratings. .He also added that National Board of Accreditation (NBA) accredited the B.Tech Aeronautical Engineering Programme.He mentioned that Hindustan University is the only institution certified with 5S Workplace Management by TUV (Rheinland) India. It was an achievement in research domain for the university as the institution was ranked 6th in India for filing patents. The Vice Chancellor proudly highlighted the awards and recognitions received by the institution, management, staff and students during this academic year. The report contained a long array of the new initiatives, new equipment, infrastructure added, international MOU’S, International visits, staff and students exchange programmes and research activities. In a nutshell, he rendered how Hindustan University organised a total number of 155 programmes during the period.

As part of the Chancellor’s address, Dr. Mrs. Elizabeth Verghese, stressed on the importance of research in engineering education so as to create quality engineers to contribute for the sustainable and economic growth of the nation. She suggested that the graduates should develop emotional strength to face the challenges of life and also insisted that, they should work for the welfare of the mother nation. She proudly announced that the Hindustan Group of Institutions has completed 50 years in the field of educational excellence by contributing the best engineers to the society. She concluded the address by quoting the words of great philosopher Dalai Lama “The very purpose of our life is happiness, which is sustained by hope. We have no guarantee about the future, but we exist in the hope of something better. Hope means keeping going, thinking, ‘I can do this.’ It brings inner strength, self-confidence, the ability to do what you do honestly, truthfully and transparently.”

Mr.MeccaRafeequeAhammed, in his speech expressed his deep appreciation and humility to be honoured for the recognition given to him and the worker community of his firm. He told that the footwear industry has produced huge number of job opportunities for the low income households. He then congratulated all the graduates for their achievements and congratulated the institute for propelling and producing the best engineers.

Mr.Alex Jacob in his felicitation address congratulated all the graduates and thanked Hindustan Institute of Technology & Science for honouring his contributions to the society by conferring Honoris Causa. He told that the quality of graduates testify the excellence of Hindustan Group of Institutions and also urged the students to remain humble in all walks of their life and uphold the values and morals inculcated by the education.

PadmashriNarain Karthikeyan expressed sincere gratitude for bestowing the Honoris Causa and told that it is a sign of recognition to the field of motorsports. He said these kind of recognitions will be an inspiration for other aspirants in the field of motorsports which happens to be a new arena. He also recollected the sustained hard work with a goal to become a successful Formula One Driver right from his childhood, it was not an easy route to reach the pinnacle and also informed he was the pioneer in this sport from India. He advised the students to be focused on their aim. He urged the students to step out of their comfort zone to achieve greater heights in their life overpowering hurdles they encounter.

Dr.S.Christopher, Chief Guest of the ceremony, in his address to the graduands reminded that convocation is the day of culmination of their studies but it marks the beginning of the real challenges ahead in their lives. He applauded the mission of our University and stated that it has to be the goal of all educational institutions to achieve excellence. He also reminded students the importance of developing a professional culture in respective arenas and told that “actions speak louder than words”. He motivated the students by sharing the success stories of great scientists and inventors like Alexander Graham Bell and Albert Einstein. He insisted the students to be innovative and productive in their field of expertise. He also suggested that the encouragement given by the faculty, parents and friends play a crucial role in sculpting successful professionals. 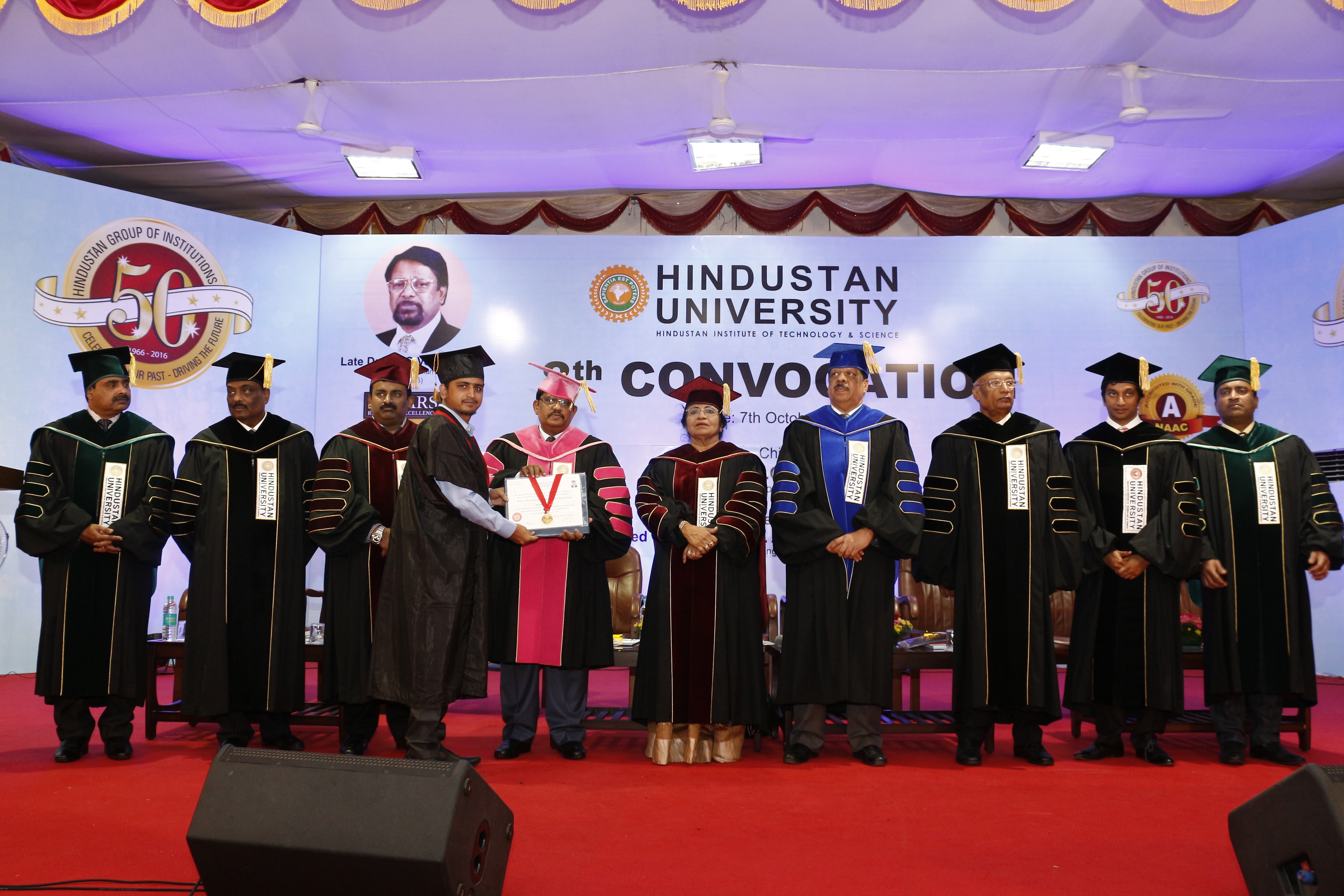 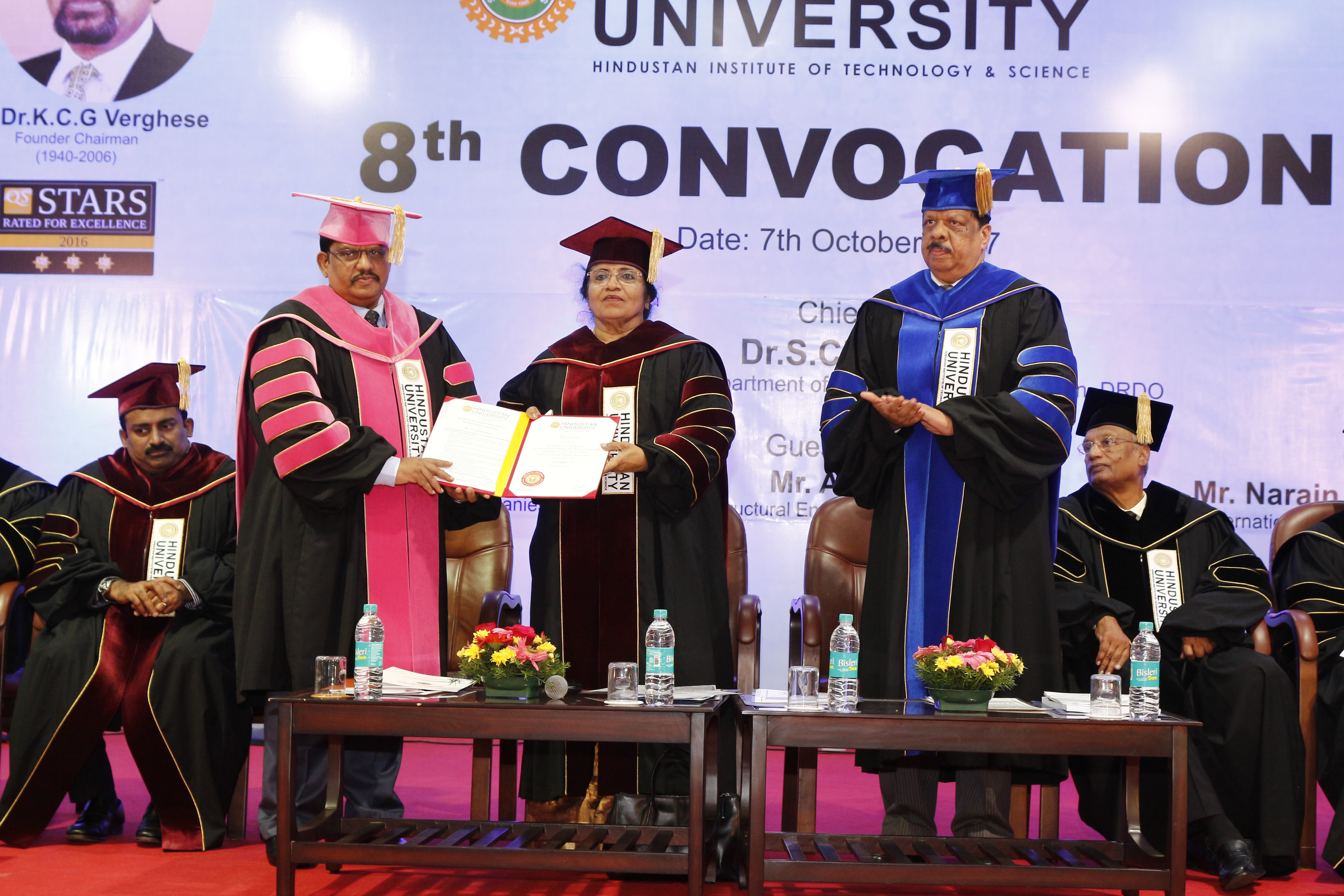