The Hindustan Masquerade Theatre Club of Hindustan Institute of Technology and Science celebrated World Theatre Day online on 27 March 2021. Organized under the Flagship ‘ATHENA’ Literary Club of the Languages Department, the celebration staged 7 Monologues titled “My Conversations” which included “I Hate Men!” by Varsha Nair, “Thank you for Understanding” by Yuvan Menen, “I’m a Medium!” by Sri Ratan, “Divorce with a Side Ketchup!” by Priyanka Mishra, “OMG! He Texted!” by Aparajeetha K., “She Stole it” by Mohana Keerthi, “My ‘Best Friend’ at work” by Rhythm Gupta. Dr. Asha Kuthari Chaudhuri, Professor and former Chair, Department of English at Gauhati University, Specialist in Drama & Theatre Studies presided as the Chief Guest. The event was hosted by Mr. Yuvan Menen, I Year, B.A. Psychology and Ms. Stuti Goyal, II Year, B.Tech. Aerospace Engineering.Ms. Jane Carolyn gave a melodious beginning to the event with a prayer song.

Dr. AkkaraSherine, Head, Languages and Rankings welcomed the guest and the gathering. In her speech, she depicted the importance of theatre and briefed the activities carried out by Athena Club; notably, the 3 Plays hosted by the students in 2018, and the first Scrabble Tournament in 2019. Dr. Asha addressed the audience & threw light upon what theatre is stressing on the word ‘contagion’ as it resonates with the time we are in now.To Dr. Asha, the plays and the programmes could still be conducted online during the pandemic, but the charm and the charisma of the event were lost; as one does not feel the vibrations of the live event on a digital forum. Following this talk, the induction of the council of the ATHENA Literary Club was done, welcoming the newly-elected members. The Club President, Avinash Mallick, Second Year, B.Tech. CSE briefed about the upcoming events of ATHENA like Scrabble Day, something about Fan-factions, Celebrating Books and Authors, make believe Professional Critiques, reading e-books so as to give a little oomph to the upcoming writers and so on.

Ms. Varsha Nairintroduced us to the participants, and the performances of “My Conversations”. The acts varied in genre and the emotions: while some of them were musical, comedy, sarcasm and so on. Dr. Asha was called upon to give feedback on the acts and the event on whole. She had some really nice things to say as in for the whole event, she felt a personal connection and that is an appreciable feature for everyone and also gave comments on each of the acts. She also gave some suggestions on how the acts as well as the event could have been carried out better than it already was.Ms. Ankita Tirkey, Vice president of the ATHENA Council proposed the Vote of Thanks. The event well-coordinated by Dr.Sonu Joseph, Assistant Professor, Languages was much appreciated by the audience. 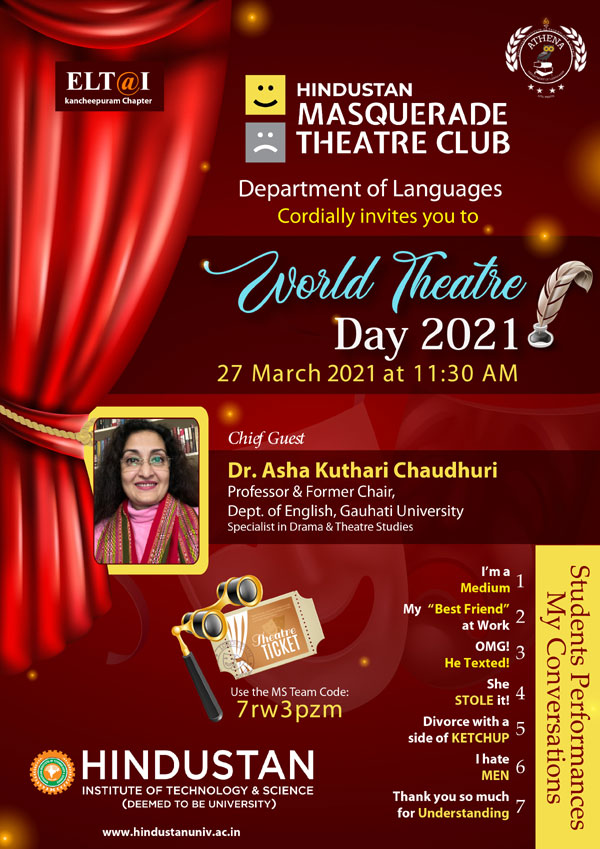