World Environment Day is being observed on 5 June engaging governments, businesses and citizens in an effort to address pressing environmental issues. School of Planning, Architecture and Design Excellence (SPADE) commemorated World Environment Day in association with Institute of Town Planners India (TNRC) on 5 June 2021on theme Ecosystem Restoration.For too long, we have been exploiting and destroying our planet’s ecosystems. Every three seconds, the world loses enough forest to cover a football pitch and over the last century we have destroyed half of our wetlands. Ecosystem restoration refers to preventing, halting and reversing this damage – to go from exploiting nature to healing it.

The virtual event started with welcome address by Mr. S. R. Rajendhiran, Chairman, TN Regional Chapter, ITPI. He highlighted over 20 environmental problems which is world is facing today. and emphasized on the need of World Environment Day, where only 12 % of cities in the world have air quality measures in place that meet the World Health Organization standards.Dr.S. N. Sridhara, Vice Chancellor, HITS delivered the presidential address and briefed on the history of World Environment Day, and the role of United Nations in making it a global event through its conventions. He also emphasised on the healing quality of the nature and its rejuvenation with the example of recent lockdowns due to COVID 19 all over the world and the cost which one spends on oxygen cylinder, which nature gives us at free of cost throughout our living. 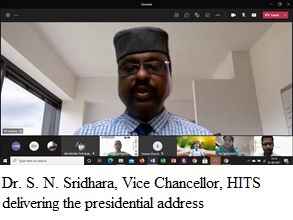 Dr.SheebaChander, Dean (SPADE), set the context of the day, on elaborating the theme – Ecosystem Restoration. Eco system is theinteraction between living things and their surroundings. Restoration of ecosystem in cities includes, planting trees, greening up our cities, cleaning our river banks, and bringing back healthy surroundings, which increases the health of the individuals living in the cities. This is also one of the important milestones in achieving world sustainable development goals.

Mr. Pradeep Kapoor, Council Member & Former Secretary General ITPI, and Addl. Chief Town Planner, Rajasthan delivered the keynote address. The address emphasised on the adverse impact of climate change in India, by the frequency of cyclones hitting our countries coast, melting of glaciers, and the dumping of garbage in the ocean by the people. He also spoke on the shortage of water, which Chennai city experiences often, which is also due to the impact of climate change.Dr. M. V. Ramana Murthy, Director, NCCR, Ministry of Earth Sciences, NIOT, Chennai deliberated on the topic "Conservation of Coastal Ecosystems Towards Sustainable Coastal Development of Cities". In his presentation, he emphasised on the coastal management system and its threats and briefed on the Indian marine ecosystem, and its relationship with environment and socio-economic systems. He also touched upon intertidal ecosystems, coral reefs and seagrass found in our countries coast. He gave a brief on Pullicat lagoon, its socio-economic benefits and Pondicherry beach restoration projects, where he had worked. Vishakhapatnam road realignment near the coast is one project where he is currently working, on which he shared about its insights. He concluded that Marine spatial planning is the need of the hour, on which he detailed out its stages of development and achievements for urban planners.

Mr. Rajan Samuel, Managing Director, Habitat for Humanity, India, presented on the topic "Preserving and promoting sustainable housing ecosystems in cities". His presentation focused on Housing and Housing ecosystems which includes WASH – water sanitation and hygiene, solar energy and technology. He emphasised on the role of sustainable housing design, which uses the locally available material and its cultural appropriation with the people. WASH – the project focused on school sanitation, and its importance in its maintenance, and the amount of freshwater spent on it on daily basis. He also explained about the various projects which Habitat for Humanity was involved across the country, especially in Maharashtra, where solar energy was extensively utilized, which changed the fabric of the community. He concluded with his key recommendations which includes adoption of solar powered rainwater harvesting, solid waste management system and to embrace innovation, where he quoted the example of a 3D printed house in IIT, Madras. 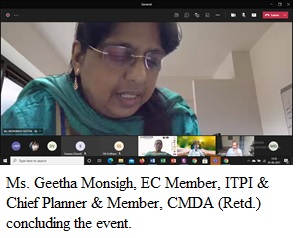 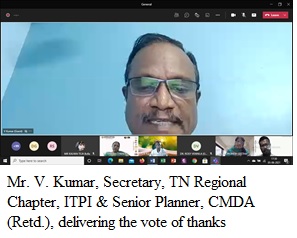 Dr. K. Gunasekaran, HOD, Transportation Division, Civil Engineering Dept. & Estate Officer, Anna University discussed on "Transportation Actions to Integrate Environmental Resource and Transportation Planning". He gave an introduction on the growth of Indian cities along radial routes and its organically growing nature. He also emphasised on the adverse health impact due to transport sector, and the actions taken by the government with respect to its policy changes and actions which includes, National Urban Transport Policy, etc. He stressed on the need to have land use transport interaction, active cycling and walking spaces, the importance of public transport system, transit-oriented development, Intersection design, etc.

Dr. Rosy Vennila, Retd. Dean, Karur Govt. Medical College, presented on the topic “Regenerating the socio-ecological system as a response to manage the COVID-19 situation in cities”. Over population and industrial revolution in the cities has been the reason for the spread of infectious diseases in the world. She also appreciated the efforts taken by the governments across the world in dealing with the pandemic and the invention of vaccine within a short period of time. This COVID pandemic exposed the health infrastructure facilities available around the world. The health infrastructure facilities which is already been built up in states like Tamil Nadu, especially its primary, secondary and tertiary hospital care was highly appreciated, and the manner in which it is spread across the state was highlighted. The dangers of external dependence due to the globalization was clearly brought out in this pandemic situation, where countries which had their own manufacturing and its supporting facilities survived. She concluded with the need to restore health care systems and the knowledge sharing mechanism to save the humanity.

Ms. Geetha Monsigh, EC Member, ITPI & Chief Planner & Member, CMDA (Retd.),concluded the event, by highlighting on the key take away from all the speakers presentation. Mr. V. Kumar, Secretary, TN Regional Chapter, ITPI& Senior Planner, CMDA (Retd.), delivered the vote of thanks, where he thanked the Management of Hindustan Institute of Technology and Science and the members of Institute of Town Planner, India, Tamil Nadu Chapter, the speakers, the students, and the members who attended the event.