The School of Planning, Architecture & Design Excellence conducted a webinar on “Women in Architecture and Design – Choose to Challenge”on the occasion of International Women’s Day on 8 Mar. 2021 in online mode through MS Teams. The guest for the webinarwasDr. PonniConcessao, Principal Architect, OCI Architects Ponni& Oscar. Students of B.Arch., B.Des., M.Arch. and M.Plan.and faculty members of SPADE participated.

Ms. Dhanalaxmi, 4th Year B.Arch. started with an overview of the spirit of Women’s day and the significance of the webinar. Dr.SheebaChander, Dean (SPADE) delivered the welcome address. Ms.Sruthy, 4th Year B.Arch. introduced the speaker, Architect Ponni.Dr.Ponni M. Concessao did her B.Arch. from NIT, Trichy (1987), later did her M.Arch., Cornell University (1989) and Advanced Professional Studies at Harvard University in 1992. She was conferred an Honorary Doctorate in Modern Architecture in 2008 in Malaysia, and University of Milano for Modern Architecture and Architectural Science, 2014. She has worked with internationally renowned architectural firm Edward Larrabee Barnes in New York City.She has won over 138 International, National and State awards for architecture, interior designs and has been widely published in design magazines and newspapers. Architect Ponni received the Distinguished Alumnus Award from National Institute of Technology during the Golden Jubilee Celebrations from his Excellency the former President of India, Dr. APJ Abdul Kalam.Ar. Ponni was recently awarded the Women Icons of Asia 2019 in Singapore along with 11 women from Asian nations. Architect Ponni is involved in the Prime Minister's Pradhan Mantri Awas Yojana project and also built noon-meal centers, toilets for underprivileged girl students as well as schools for leprosy afflicted patients' children. Ar.Ponni also has annual exhibitions of her paintings to raise funds for Leprosy Eradication.

Ar. Ponni’s session started by sharing her views on how challenging the world was for a woman herself to achieve a position she is now today. Facing gender inequality at very beginning, she managed to pursue her dreams and became the first woman candidate to study at NIT Trichy. She also shared her experience in USAat Cornell and Harvard Universities where she broke more gender and national barriers; and how was she able to turn challenges to a problem-solving scenario to achieve a goal. Ar. PonniConcesso also shared the architectural and interior projects, from residential to institutional, commercial and hospitality which she had led and designed. Students were more interested in asking about Ar. Ponni’s aspiring stories in life as a woman.The webinar ended with the vote of thanks by Ar. Reshmi Panicker, HOD (P&A) proposed the Vote of Thanks. 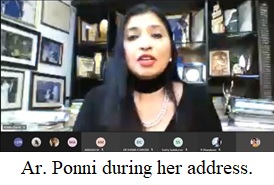 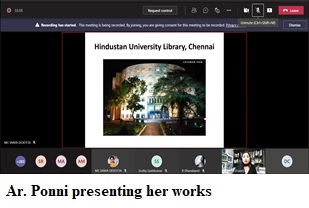 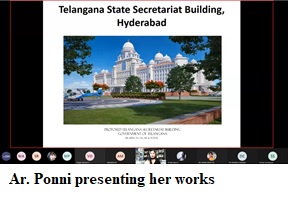 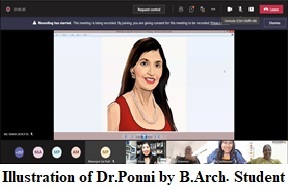